‘Fantastic Beasts: The Secrets of Dumbledore’ Review: The Plot Against Muggles Like so much children’s entertainment these days, “Fantastic Beasts: The Secrets of Dumbledore” is a political primer sprinkled in magic dust. In this third installment in the “Fantastic Beasts” franchise (itself a prequel series to the original “Harry Potter” stories), cuddly critters have mostly been swapped out for darker creatures: Here, scorpionesque freaks guard a prison where activists are tortured (or worse). A chunk of the story is set in 1930s Berlin. The deadly stakes are crystal-ball clear. An alternate subtitle could be “Totalitarianism for Tykes.”

It’s a pointed movie from tip to barbed tail. Instead of building the plot around a tedious pursuit peppered with cutesy digital monsters — a misstep in the first two “Fantastic Beasts” films — the returning director David Yates and the screenwriters, J.K. Rowling and Steve Kloves, center “Secrets of Dumbledore” on an election. Grindelwald, the wizard supremacist last seen attempting to incite a global war, hopes to convince the magical world to back his campaign platform to subjugate nonmagical humans. (The role was last played by Johnny Depp; Mads Mikkelsen takes over the role here, and Grindelwald’s threats sound more probable when delivered with Mikkelsen’s bloodless chill.) Rowling’s readers know to refer to nonmagical people as Muggles. To Grindelwald, they’re “animals,” though he concedes they make a good cup of tea.

The focus is on the tragic entanglements of Albus Dumbledore (Jude Law), who once romanced the hate-inciting Grindelwald and still wears an old blood-oath necklace that strangles him for thinking mean thoughts about his former love. On top of being pained by his bad taste in men, Dumbledore must make amends with his grouchy brother (Richard Coyle) and tormented nephew (Ezra Miller), a murky figure so visibly miserable that flies buzz around his hands.

Theatre kids are always a little insufferable. It’s just part of their DNA. And Tick, Tick… Boom! is created entirely by them and for them, adapted by Hamilton’s Lin-Manuel Miranda from a stage show by Rent’s Jonathan Larson. Inevitably, this will annoy some – they’ll find it all far too earnest, too shameless in its desire for likeability. But what other kind of person would seek a life where every emotion lives in search of a beat? Who else would be prepared, night after night, to bear their wounds and secret joys for all to see?

Still, Tick, Tick… Boom! saves itself from the navel-gazing brink by having both Larson’s writing, and Miranda’s staging of that writing, repeatedly acknowledge the narcissistic insularity of the Broadway world. Its premise reads like parody: a straight white guy drives himself to misery because he hasn’t written the next great American musical by the age of 30. He can’t believe the world didn’t fall head over heels for his last project, a futuristic rock opera titled Superbia. The “tick, tick” of the title is the invisible clock counting down to the fate of permanent obscurity.

Except, it isn’t. Not really. Larson was writing about his own life. Superbia was real, and Tick, Tick… Boom! was his autobiographical way to shoulder its failure (he’s played onscreen by Andrew Garfield). Larson would go on to write the great American musical of his generation, but would die from an aortic dissection on the day Rent was due to have its first preview performance. Miranda’s film finds a graceful balance between fact and fiction, framing art as a heightened form of self-obsession and the most magical and important thing in the world.

And why shouldn’t Miranda be allowed to celebrate his craft? He is the Larson of his own generation, Hollywood’s go-to music man, with that same urgent, electric drive to his work. This year alone, he’s seen his musical In the Heights adapted to film and contributed songs to the animations Vivo and Disney’s Encanto. The fact Tick, Tick… Boom! only now marks his directorial debut comes almost as a surprise. After this, will there be no more worlds to conquer? The film, as one might expect, is enthusiastically self-referential when it comes to Broadway tradition. Not only is composer Stephen Sondheim (Bradley Whitford with a withering look) treated practically as a living god, but Miranda never throws away his shot (get it?) when there’s a musical reference to be made – to the old, to the new, to his own work.

It wouldn’t be a stretch to say that this script (from Liang and co-writer Max Landis) is essentially a collection of storytelling gears, and it also wouldn’t be a stretch to point out how much this script does not conceal its awkward shape. From the beginning when Moretz is trapped in the turret, having to fend off objectification and fighting to be taken seriously, the script is mostly concerned with making sure you can relate to her experience, and that you care about the mysteries that are and are not methodically revealed. So if it’s not the sexism that gets you, it’s the impending threat of Japanese enemy fighter planes, or the snarling creatures that look like skinless, winged cats ripping up the plane as if it were a nice couch. These three obstacles that Garrett faces don’t entirely fit together, but the film is more amusing if you just accept them all.

Pieces of a Woman review – a home birth ends in tragedy

Vanessa Kirby excels in devastating exploration of grief and loss

This is not a film to watch if you’re pregnant. One of the first scenes, a 24-minute continuous take of a home birth that ends in tragedy, is extraordinarily powerful and painful to watch – almost unbearable sometimes – and Vanessa Kirby as Martha, groaning and growling her way through a very realistic labour, is brilliant and unforgettable.

Director Kornél Mundruczó and his wife, writer Kata Wéber (White God, Jupiter’s Moon), wanted to share something of their own similar experience of loss and originally wrote a version for the stage – it premiered in Poland in 2018. But Wéber wanted to expand it into something more wide-reaching. Although not a complete success, it’s moving and shows how grief is perceived and co-opted by others.

Martha and Sean (an excellent Shia LaBeouf) are a Boston couple: he’s a construction worker on the bridges, has six years of sobriety under his belt and was in a Seattle grunge band back in the day. She’s posher, with an office job and a formidable Holocaust-survivor mother, Elizabeth (a marvellous Ellen Burstyn), who fiercely disapproves of Sean. In an opening scene, just after Martha leaves the office to start maternity leave, Elizabeth tries to “minimise” him, as he puts it, by buying them a car that, according to him, he could have bought himself.

Their relationship, though close, looks as if it might not withstand many knocks. During the labour, beardie Sean tries his best in a lukewarm way, getting water and rubbing Martha’s back when asked, and trying to distract her with some of his trademark feeble jokes: “Where does broccoli go to get a drink? To the salad bar.” 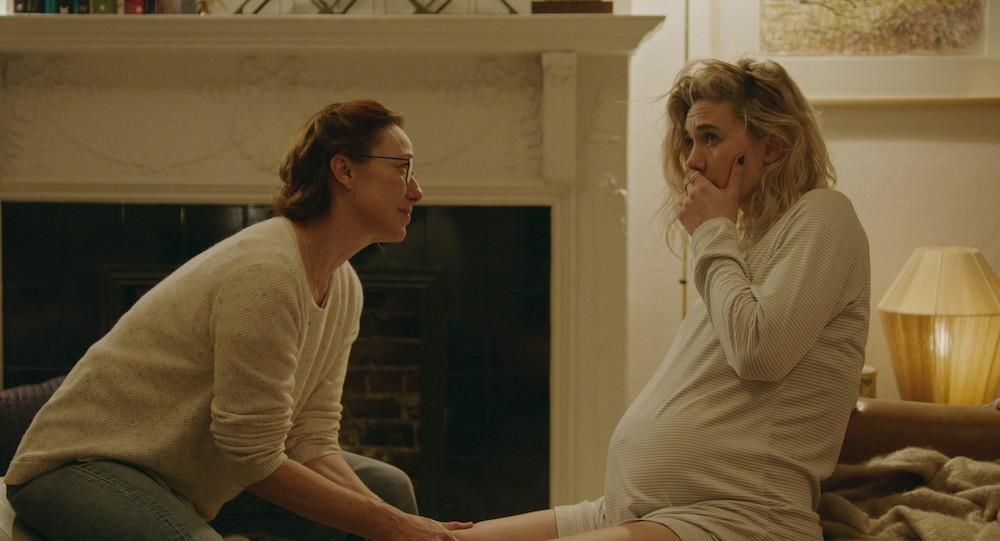 At first things seem to be ticking over. “We’re getting a little bit of a rhythm going,” says Sean, irritatingly, on the phone to Barbara, their appointed midwife. But she’s busy with another labour and a replacement, Eva (Molly Parker; House of Cards; pictured above), who they’ve met but don’t know well, takes over. Laughing inanely, she doesn’t inspire confidence and you want to shake the increasingly panicked smile off her face and yell, “Get the woman to a hospital.”

This birth scene is so visceral, so traumatising, that the second half of the film (executive produced by Martin Scorsese) is doomed in some ways to limp along in comparison, with some unsatisfactory loose ends in the narrative. But Kirby’s performance remains very moving, from her furious dignity at her first day back at work where her colleagues stare at her dumbly, to the misery of leaking breasts as she locks eyes with a child in a department store, and her lonely decision over the burial of her baby. The bureaucracy involved echoes the mundane first scene of her signing papers for the car.

Her mother, sister (Iliza Shlesinger) and Sean are bent on suing the midwife, who’s facing five years in prison, and Sarah Snook (Shiv in Succession) plays, to type, a hard-nosed lawyer, a cousin, who takes on the case: “You could win millions.” Martha feels alone and isolated and she and Sean can’t find common ground. He attempts, violently, to have sex with her (unfortunately you can’t help thinking about FKA twigs’s current lawsuit against LaBeouf). As devastated as Martha, he turns back to booze and cocaine. Their relationship disintegrates as does the apartment, with its dying spider plants, a sink piled up with dishes, a freezer empty apart from frozen vegetables that Martha uses to soothe her aching breasts. 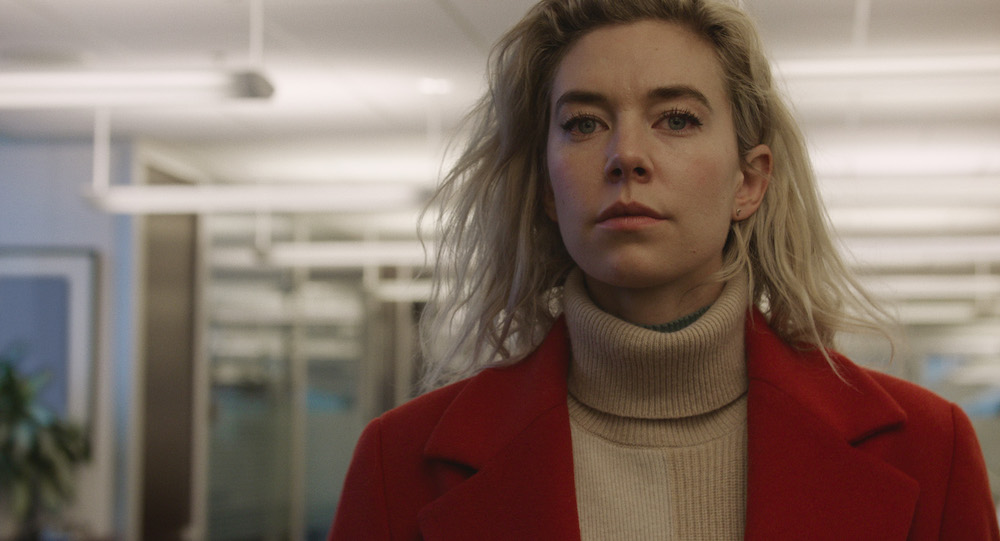 A family lunch underscores the distance between them all, though Elizabeth’s virtuoso speech to Martha about her own mother giving birth to her when hiding from the Nazis is a catalyst for change, albeit laced with cruelty. When Martha accuses her mother of only thinking about her own needs, Elizabeth retorts, “If you’d done it my way, you’d be holding your baby in your arms now.”

Elizabeth is so keen to get rid of Sean, who knows she thinks he’s boorish – “Now there’s a Scrabble word” – that she gives him a cheque. “Never come back,” she warns. This seems unlikely as they were, briefly, united in their enthusiasm over the court case. Martha even accuses them of teaming up against her. It’s a portrait, although not a very consistent one, of a family in crisis that devours its members, and it turns rather too fast into something more sentimental at the end.

The credits, intriguingly, thank Susie Orbach as well as the midwifery team at the Whittington Hospital, where Kirby shadowed an obstetrician and midwives for days – and the authenticity of her remarkable performance certainly shines through.

he script is smart enough to avoid the usual feelgood cliches and sentimental flourishes and Lloyd’s cast of plain-speaking British and Irish actors ensures that everybody remains firmly in touch with the gritty realities.

Going in blind, I quite enjoyed this movie. Sure, it has it’s shortcomings but no way near the hate it’s getting here. I don’t think this movie was intended for Turkish audiences, who are very vanilla most of the time when it comes to any form of art. I don’t know what this movie claimed to be during the advertising period but if you watch it expecting a “normie” comedy, you’ll be disappointed. That exact reason is why I enjoyed it. It can be called dark comedy-ish I guess, labels don’t matter to me. The art direction was quite beautiful and the acting was decent, as expected from a cast of veteran actors. Comparing this to the dumpster fire that was Leyla Everlasting is a blasphemy.